An enormous outburst from the vicinity of the Milky Way’s central black hole sent cones of blistering ultraviolet radiation above and below the plane of the galaxy and deep into space. The radiation cone that blasted out of the Milky Way’s south pole lit up a massive ribbon-like gas structure called the Magellanic Stream. This vast train of gas trails the Milky Way’s two prominent satellite galaxies: the Large Magellanic Cloud (LMC), and its companion, the Small Magellanic Cloud (SMC).The astronomers studied sightlines to quasars far behind the Magellanic Stream and behind another feature called the Leading Arm, a tattered and shredded gaseous “arm” that precedes the LMC and SMC in their orbit around the Milky Way. Unlike the Magellanic Stream, the Leading Arm did not show evidence of being lit up by the flare. The same event that caused the radiation flare also “burped” hot plasma that is now towering in ballooning lobes about 30,000 light-years above and below the plane of our galaxy. These bubbles, visible only in gamma rays and weighing the equivalent of millions of Suns, are called the Fermi Bubbles. The Fermi Bubbles and the Magellanic Stream were thought to be separate and unrelated to each other, but now it appears that the same powerful flash from our galaxy’s central black hole has played a major role in both, United States on 2020/06/02. EXPA Pictures © 2020, PhotoCredit: EXPA/ Atlas Photo Archive/ NASA/ESA 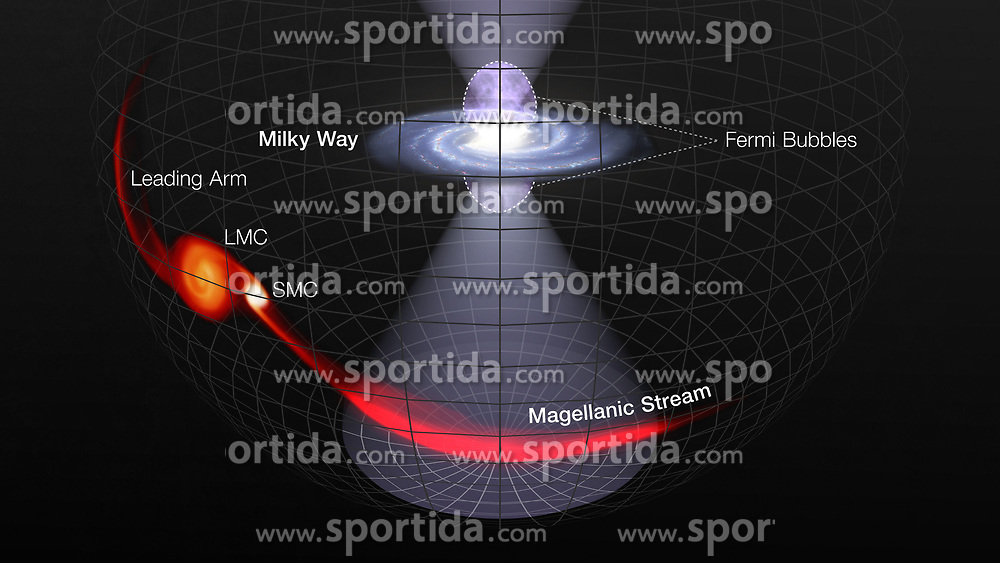